Paint the Town Red with mods starts in a pretty innocent setting – over a pool table. However, the balls are of a weird shape, they are square. Everything in this game is square. According to the plot, the main hero is hanging out with a group of criminals who chill out in a bar between the thefts. His task is to find out as much information about these guys as possible and eventually hand them over to the police. But, sooner or later, even the best cover can be blown. These ‘friendly meetings’ are over when you buddies find out that you are a fraud. Now they want to kill you and you must be quicker and stronger to successfully defend your life.

You were caught off guard and you don’t even have a gun to fight the criminals off. Instead, you are going to use just about anything that you see around. Pool sticks, chairs, table legs… Enemies are everywhere and everything standing or lying around the bar can become a weapon. It all depends on your ability to think and act fast in a critical situation like this. Don’t relax until the last opponent is down. Finish off the entire gang! This is the only way for you to get out alive. As soon as the bar door closes, there will be no way out until each and every member of the gang is done with.

The graphics of the game deserves a separate mention. It is performed in a very distinctive style. Even the blood of your foes falls apart into square when it’s spilled. You can also chop the opponent’s head with a knife in one stroke or make a hole in him with a pool stick. There are multiple levels, a great number of weapons that can be picked up and dropped in several ways, cool bosses and many other exciting features! 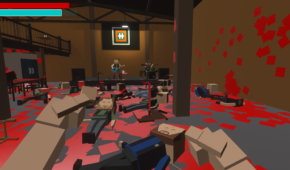